One of the goodies that Clicks spoiled me with the other day was a Vidal Sasoon Hydra Gloss hair straigtener, R300.

I was a little slow in getting round to using it as I’m going through a bit of a ‘waves’ phase at the mo, but after hearing all the other beauty editors rave about it’s fabulosity, I broke it out the box. Now, having given it a good bash, I can tell you I’m also very, very impressed.

Feature-wise, you’re looking at a light weight medium-sized straightener with floating ceramic plates. It’s features include a digital display and 1,8 metre swivel cord. It’s also got ‘optional ionic technology’ in that if you press the ‘ions’ button, negative ions are transferred into your hair by the straightener’s air stream. This helps to seal in moisture to help create shiny-looking frizz free locks. (Personally, I have no clue as to why anyone wouldn’t want to use the ionic setting every single day so the fact that it’s ‘optional’ as opposed to standard is a bit strange.)

As I own a fancy pants ghd Gold Classic styler, the straightener had stiff competition, but I’m happy to say it’s performance is just as good. Seriously! It straightens and creates flicks like a dream; takes the exact same time to heat up as my ghd and also features an automatic shut off. Unlike, a ghd, however, you can choose your temperature setting. (For those who don’t know, ghd’s are automatically set to 180-degrees as they feel this is the optimal temperature for hair straightening and anything higher than that will damage your locks. Interestingly, before I knew this, I found that I best preferred using the VS straightner on 180 too.)

The place the VS straightener loses out is in the looks department; it’s controls look cheap and plasticky. 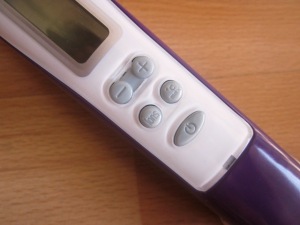 Still, if you want a very good hair straightener at an even better price, I can’t reccomend this guy enough. He gets a very satified two thumbs up.