K, so let me tell you all about this little particular little opskop…

Held at The Table Bay hotel, this is THE pre-Met party you want to go to. Think zexy celebs, cutesy canapes and litres of booze a la vino and J&B. I arrived with Lee-Anne Summers, but soon lost her in the crowd.

The first person of interest I ran into was our new Miss South Africa, Bokang Montjane. I’ve seen pics of her in the media and have always thought she was hottie, but you have no idea how gorgeous she is in the flesh. I actually didn’t want to snap a piccie with her as I thought I’d look like a runty white rat next to her tall, dark chocolatey-ness.

Gorgeous, right? I told her I thought she looked like a young Naomi Campbell, but she laughed it off. Still, l really do think that she gets that all the time…

Another fellow ‘gloss girl’ on the scene? eTV’s Tanya Nefdt. She and I have the same taste in lip gloss and I though she’d fall in love/die with envy upon trying my swanky new YSL Golden Gloss in Golden Fucshia

It’s contains 24 karat gold flakes *Leigh flicks her hair* and has the yummiest juicy mango scent. (I got it just the other day thanks to the gals at the Beauty Bulletin. For my full review, go check out their site on Friday…)

3 Talk’s Noeleen was also out and about. 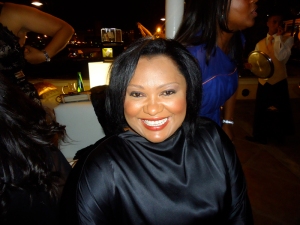 I’ve never been intimidated by celebs as working with them is part of my job as a journo, however, there’s something about Noeleen that just freaks the shizz out of me. I have no idea as to what it is, but ja… I often see her at partyties and just never have it in me to go up to her and ask her something as frivolous as ‘so, what’s in your make-up bag’. Still, I decided that tonight was the night I’d get over my ‘Noeleen Terror’ and even knocked back a little J&B to rustle up some (Dutch) courage. But I really shouldn’t have worried… she turned out to be uber-nice (sjoe!) and told me that her top beauty must-have for the Met was sunscreen. (Her favourite is Dermalogica, which she calls ‘excellent’.)

Oh! And Jen Su was there too, looking fab in a feathery hat she picked up in Thailand.

Jen says she’ll also be wearing sunscreen at the races, La Mer The Spf 18 Fluid, nogal… She also told me you’ll be able to spot her on TV again towards the end of Feb. She’s got a cameo on Jacob’s Cross playing ‘an evil Chinese businesswoman’…

Now let me show you one of the best things there… a veritable mountain of chicken liver pate!

I can’t tell you how much I love this stuff… it’s actually kinda sad how happy it makes me… My dad’s also a liver pate freak and even makes his own, which is tres divine. Thus, I decided to take a snap to show him it’s awesomeness. (My photographer friend, Darren, happened to be passing the buffet as I took the shot and peered over my shoulder to sniff ‘Tsk, tsk… you’ve got one bar of battery left and you’re shooting pate… Nice to know you’ve got your priorities straight…’ Hee hee hee… )

Anyway, I still had enough battery to capture the hotness that is Catriona Andrew. Can you BELIEVE this woman has just had a baby?!  Just the other day we had dinner together at a Thierry Mugler do and she looked like she was about to pop. Now she’s as skinny as a twig!

According to Cat, her secret to slimming down fast is breast feeding which helps burn, like, a zillion kilojoules.

Liezel van der Westhuizen was also there, dressed in a pretty Gert Johan Coetzee rokkie and hanging out with Langley Kirkwood. Langley’s playing the baddy in the new Judge Dredd flick, Dredd. 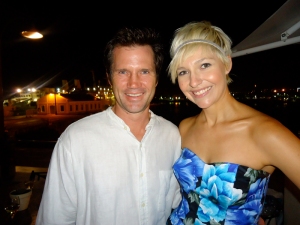 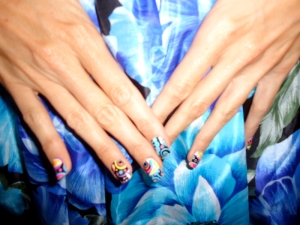 Apparently these are Sheekee nails that she got done at a salon called Girlz in Blouberg. How it works is that you get a little design decal plakked under your acrylic or gel, so it lasts for ages and reflects the most gorgeous shine.

I also spotted Lux lovely Jo-Ann Strauss hanging out at the back of the room. 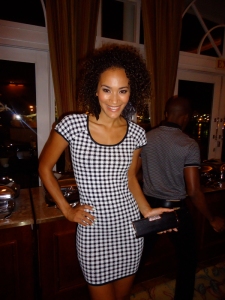 She was also dressed up in Gert Johan Coetzee (dude clearly gets around…) and told me that her Met hand bag essential is a tiny, battery-powered fan to ensure her make-up doesn’t melt in the heat.

As the night came to an end, guests were treated to a performance by Lindiwe Suttle. I’ve known she could sing for a while now, having heard the demo for Man-made Moon, her first single, late last year. However, seeing her live was great as the girl’s got a rockin’ stage presence.

After a fun, pate-addled night, I picked up my goodie bag and hit the road. (Want to know what was in it? Come on, don’t play coy with me girls… I know you’re just as desp to peek inside of it as I was… This was an event put together by PR queen Jill Grogor – and we all know Miss G doesn’t skimp when it comes to swag…)

Thank you Jill, I had a fab time as always… 😉